Good day! Welcome back to another Arduino tutorial for beginner. For today project, I am going to show you the basic usage of a push button. Let’s begin, shall we?

Before we jump into the hands-on, you need to understand how to operate a push-button as an input. Basically, there are two types of button configuration which is 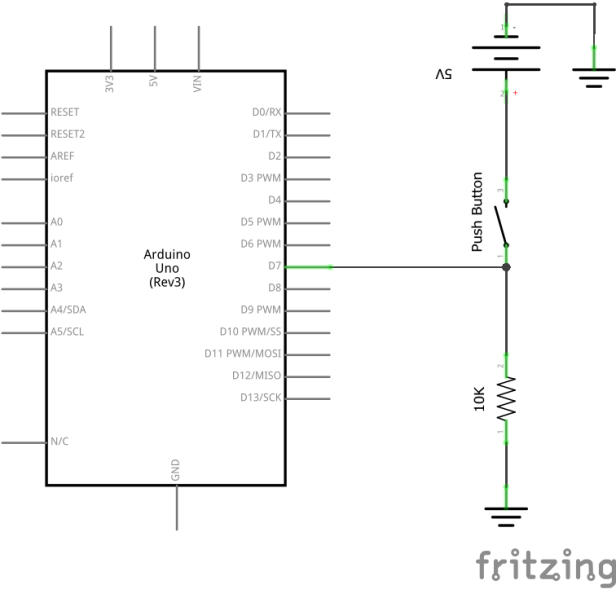 The figure above shows the push button in the active high configuration.

When the push button is **NOT PRESSED** (open circuit)
The input pin 7 on the Arduino detects logic 0 (LOW). This is because there is no current flow into it.

When the push button is **PRESSED** (closed circuit)
The input pin 7 on the Arduino detects logic 1 (HIGH). This is because there is a current flow into it. This can be explained by the path chosen by the current. The current is a smart element. When the button is pressed, the current has two way to choose for. Path to the Arduino or path to the resistor. The easy way or the hard way? Of course the current will choose the easy way a.k.a the Arduino path. This is due to the internal resistance of the Arduino is minor when compared to the 10k ohm resistor. 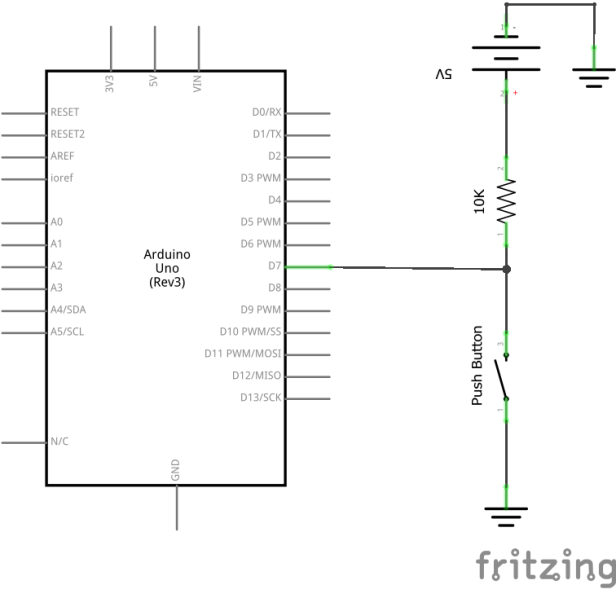 The figure above shows the push button in the active low configuration. The only difference with the active high configuration is the position of the push-button and the resistor.

When the push button is **NOT PRESSED** (open circuit)
The input pin 7 on the Arduino detects logic 1 (HIGH). This is because the current only have one path to choose for which is the Arduino path.

When the push button is **PRESSED** (closed circuit)
The input pin 7 on the Arduino detects logic 0 (LOW). Similar to the active HIGH configuration, the current has two way to choose for. This time is a little bit different, the current can either flow through the wire with no resistor or the Arduino with a minor internal resistor. The current will choose the wire path due to the negligible resistance of the wire. Amazing huh.

The table below summarizes the push-button configuration with respect to Arduino input value. Time to get your hand dirty. Before we start to upload the code, you might ask me the pin connection in the figure above look complicated. Rest assured, as I said at the end of project 0 where every project posted in this series are connected. If you are not interested in following-up this series, you just need to connect the button and resistor. On the other hand, if you are interested, you can follow my project 1 (blinking LED), project 2 (serial communication) and project 3 (PWM) tutorial write-up.

For this hands-on, I’m going to use active low configuration. Let’s compile and upload the following code.

Let me explain the following line

I leave this task as an assignment to let you figure out what is going on. If you have a question, DM me through email or twitter.

That’s all for the basic push-button tutorial. Hope you learn something new today. See ya ;)