Hello there, welcome to another short and simple CTF challenge write-up from tryhackme. This challenge is a little bit different compared to my other write-up. It involved CVE system or known as common vulnerabilities and exposures. CVE system provides a reference-method for publicly known information-security vulnerabilities and exposures. This made the challenge a little bit realistic. Without further ado, let’s dig it up!

You have only one task for this challenge, capture the flags.

In case you need an explanation on the flag:

This is not the end for the nmap! Let’s scan something beyond port 1000 using the following command.

We have something on port 2222. After searching on the Internet, EthernetIP-1 service exploitation doesn’t sound a lot to me. To double confirm it, I made another scan just for port 2222.

Bingo! port 2222 actually used for SSH service instead of port 22. Moral of the story, assign a famous port such as ssh to another port number. (Those noobs will never find it out!)

Task 1-3: What CVE can be used to against the machine?

Well, the FTP server looks empty. I guess we have to look on to another port.

Port 80 shows the Apache default page. Nothing out of ordinary.

What are the username and password for the SSH server? Guess we have to come back for this later on. Alright, We need more information to get down to the rabbit-hole!!!!!!

I try to make another deep scan on port 80 using the following command.

We get robots.txt from the scan. Let’s find it out. 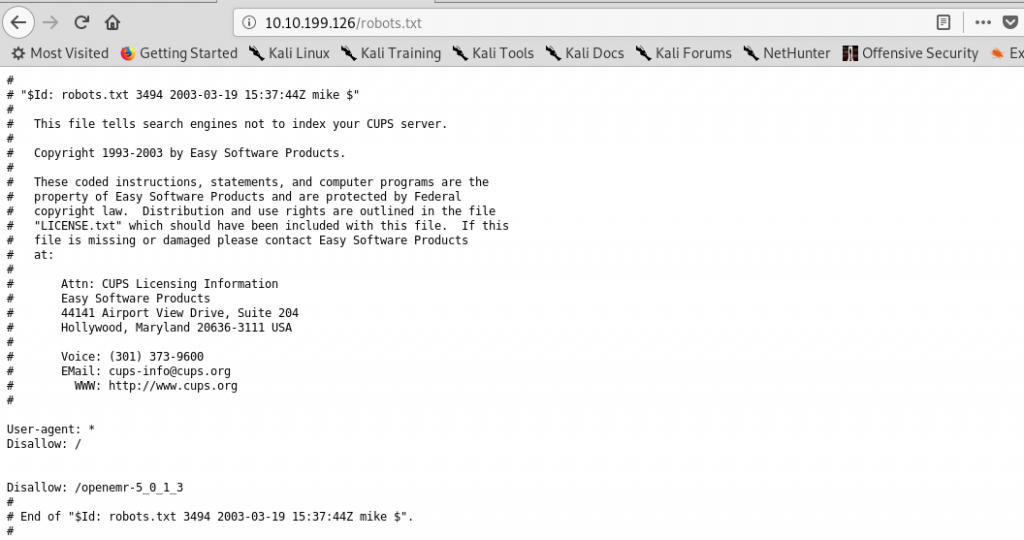 Still, the robot.txt doesn’t give any useful information. It just tells the search engine not to index the CUPS server (print server). Since port 139 and 145 are not open, we can forget the SMB exploitation. What else we can do? Directory attack.

Next, fire up the gobuster with the following command. 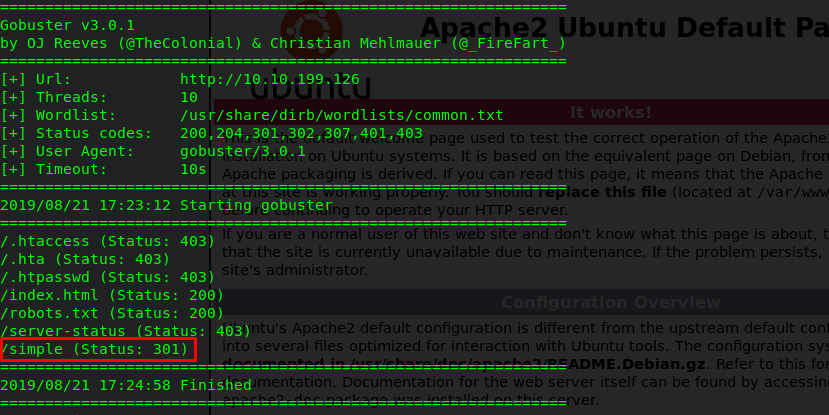 We get a webpage called “CMS made simple”. After googling it, this is what I get. 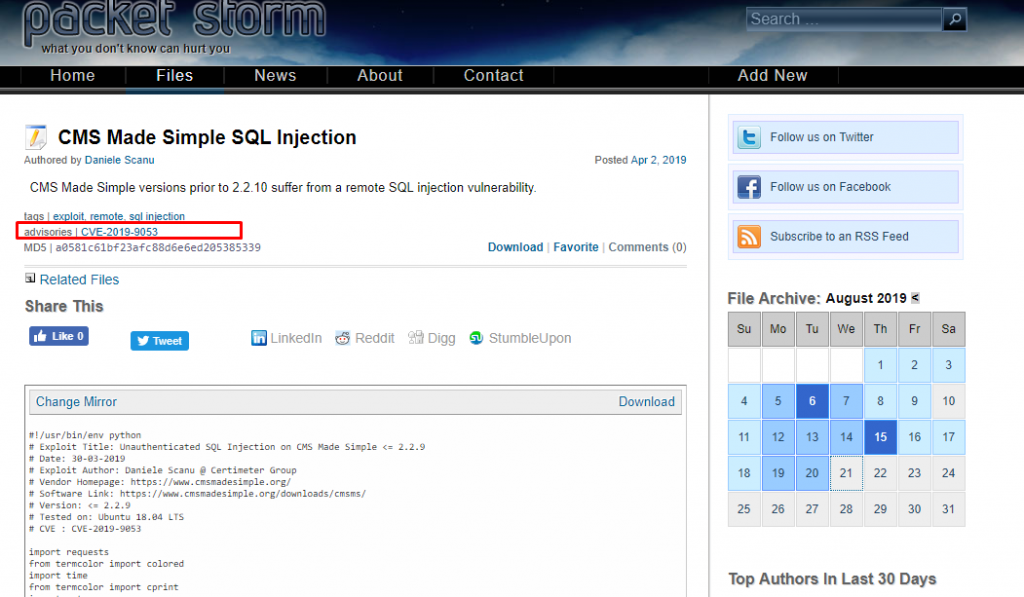 Yes, it is one of the latest CVE numbers which is CVE-2019-9053 and there is a python script inside the page.

Task 1-4: What kind of vulnerability?

Judging from the page, it is a kind of SQLi or SQL injection vulnerable.

Since the script is the only hint to complete the challenge. Copy, save and launch the script with the following command

I am able to obtain a username and password called ‘mitch’ and ‘secret’. How am I going to use this credential?

This task is easy, redirect to mitch’s folder and capture the flag. 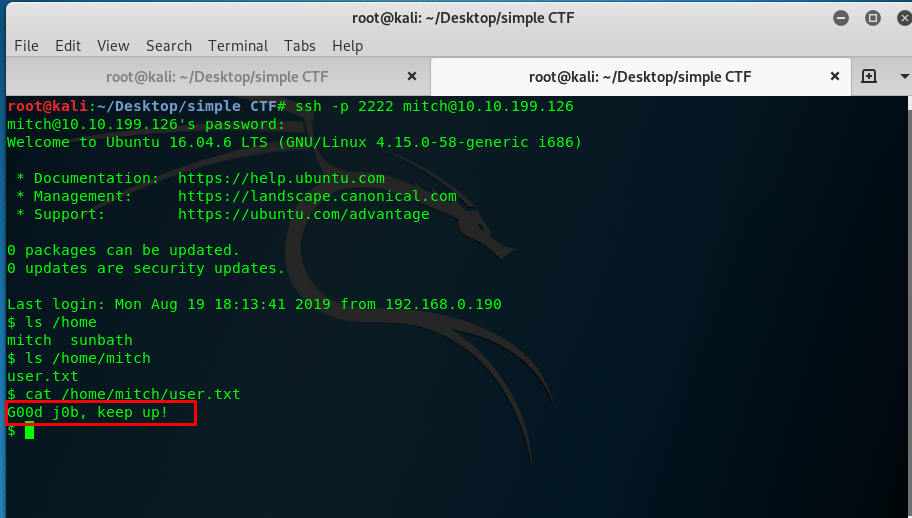 Well, the answer is on the previous task.

It is time to escalate our privilege to root and how are we gonna do that? Let see what Mitch can do with Sudo

Ah-ha! VIM is the bridge to reach the root. Time to launch the vim, with sudo. After that, type ‘:!bash’ (without the quote) and enter! 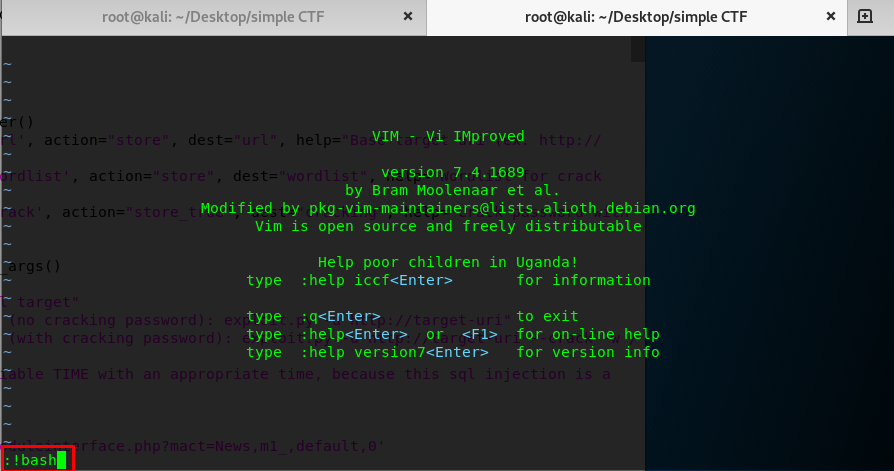 Congratulation, you are now rooted in the machine.

Like the title said, capture the flag and complete the task.

That’s it, you just finished the CTF challenge. Hope you enjoy my write-up, have a nice day ;)